The prize, which celebrates the social impact and transformative power of gastronomy, was awarded to him for his foundation Fundación Prenauta, which empowers children by teaching them how to cook and appreciate healthy, traditional food

Can a restaurant transform a community? Spanish chef Xanty Elías believes it can do that, and more. So when his former restaurant, Acánthum, in the Andalusian province of Huelva, became the first in the Spanish province to earn a Michelin star, he knew his journey was just beginning.

Chef Xanty began to direct his imagination, influence and energy into driving social projects to benefit Huelva, which has the highest unemployment rate of any province in Spain. In 2017 he co-founded Fundación Prenauta, joining hands with local businesses to provide consulting services and promote economic growth in the community.

Fundación Prenauta also collaborates with companies and institutions in Andalusia to teach students traditional recipes, and educate them on healthy eating. With this programme, where chefs travel to schools to teach masterclasses, the foundation reached over 6,000 children across more than 100 schools in Andalusia, and now plans to expand nationally.

For his impact as a change maker, Xanty has just won the Basque Culinary World Prize 2021. The BCWP, now in its 6th edition, celebrates gastronomy as a transformative force, awarding chefs who add value to their community and beyond.

The winner of the €100,000 award, which was created in 2016 by the Basque Government and the Basque Culinary Center, is chosen by a jury made up of some of the world’s most influential chefs: this year it included Ferrán Adrià (El Bulli Foundation), Elena Arzak (Arzak Restaurant), Dominique Crenn (Atelier Crenn) and Yoshihiro Narisawa (Les Créations de Narisawa).

Exerpts from an e mail interview with Chef Xanty

Why is it important to educate children about food, and what is the most powerful and memorable way to do it?

Well, for the same reason that they are educated in other subjects, so that knowledge and culture evolves for the benefit of human beings and the environment that surrounds them. Mathematics is used on a daily basis, like eating. Both are basic and necessary.

We have found a way to reach the depths of children’s consciousness, through their emotions and their senses. The kitchen is the best way to transform the food we eat, and we all have a responsibility to do it in a healthy way. 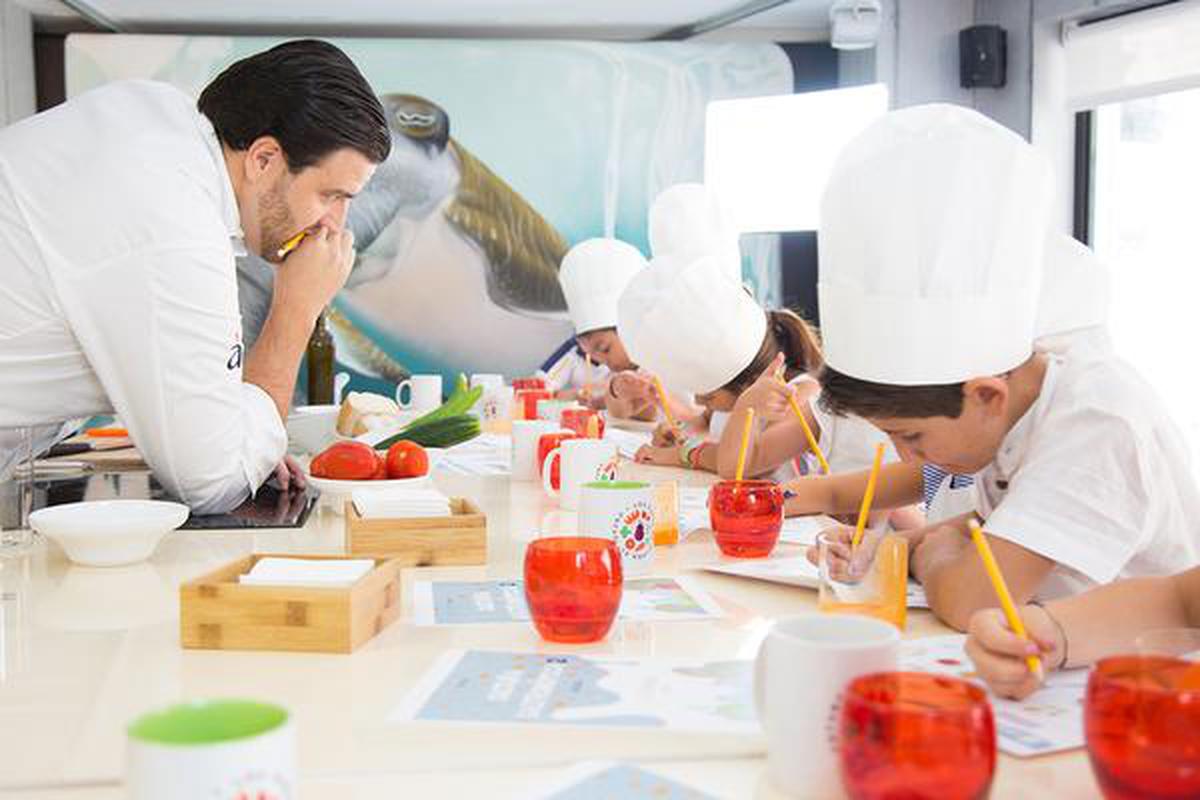 The program focuses on teaching the students traditional Andalusian recipes: why did you choose to do this?

Because it is the basis of our identity. We are what we eat, and our diet makes us feel connected to one society or another.

The food we eat reflects our personality, our climate, our respect for our environment. This itself is part of the magic of the project, because it can be replicated in every part of the world. Part of that education is teaching kids about the culture of each area, thus reinforcing the identity of each individual.

The recipes are salads, gazpachos, traditional stews, with rice, fish and meat, all part of the base of the Mediterranean diet.

This generation struggles more with obesity than their grandparents ever did. How do you encourage children to eat fresh, healthy food when packaged snacks are being engineered to be delicious and addictive?

The way we behave has changed, due to advances in technology and globalisation. Before, people were forced to move around more over the course of their day; now we have vehicles, machines and tools that make work easier and generate less kilocalorie consumption.

The key to reversing it, I think, is adapting our diet to the rhythm of our life. Our work is not based on indoctrinating children, we want them to generate their own ideas.

We believe in the responsibility of each human being, and we base it on knowledge. We believe that each person can decide for themselves about what is best for their body. We’ve already seen that it works, there is no substitute for education and empowering the consciousness of the human being.

How will winning this award help you continue and expand your work with Fundación Prenauta?

We hope that winning the Basque Culinary World Prize will increase our visibility at the international level. This recognition will help us to make the decision-makers and politicians open their eyes, and take action before it is too late.

Your latest project, the soon to open Finca Alfoliz in Aljaraque, will be focused on sustainability. Is it more difficult and expensive to build a responsible restaurant? Why do you think it is important to do this?

It certainly has a higher cost. All evolution and disruption drives up costs. However, it is a matter of personal and social responsibility.

Now it is difficult because sustainability does not interest large companies and investment funds, but it is a future that is here now! In the world of tomorrow, a restaurant is either sustainable or it doesn’t exist, and this is the new reality.

Why you should consider a CNG option for your next ride

A project of pathos showcases how we helped

Recipe for Nougat of Tours cake

How Italians sold ice cream to the masses in Vienna