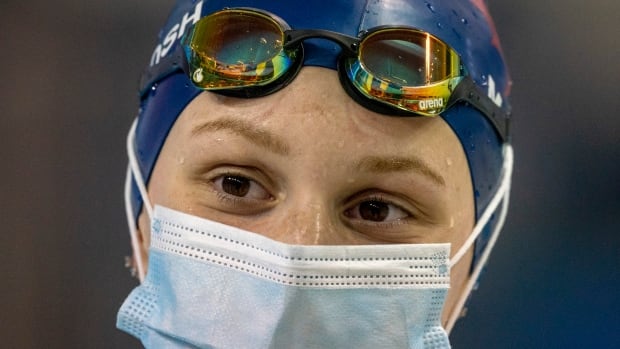 When Penny Oleksiak trained at the Pan Am pool in Toronto before the 2016 Olympics, she was known to those around her as “the child.”

At the 2021 Olympic trials, Oleksiak is suddenly the veteran.

Fourteen-year-old Summer McIntosh beat Oleksiak, now 21, to win the 200-metre freestyle final on Sunday in Toronto, booking her spot at the Tokyo Games.

In 2016, Oleksiak became the youngest Canadian to ever win Olympic gold, sharing the top of the 100 freestyle podium with American Simone Manuel.

McIntosh may be in tough matching that mark — her best disciplines are shared with U.S. star Katie Ledecky and Australia’s Ariarne Titmus — but she’s already assured of being one of the youngest swimmers Canada’s ever sent to the Olympics.

And CBC Sports swimming analyst Byron MacDonald says McIntosh could still be in the podium conversation in Tokyo.

Get must-watch video, live events and breaking news on CBC.ca

“I think she might just make the finals in one or two of her races. But she won’t be going to the podium. But if she finds another second all of a sudden, she just might be,” MacDonald said on Monday.

One major difference for McIntosh from Oleksiak will be the time in between trials and the Olympics. Due to COVID-19, the 2021 Canadian trials were pushed back from their original date in April.

14-year-old Summer McIntosh broke her own Canadian age group record for 13-14 year-olds with a time of 1:56.19 in the women’s 200-metre freestyle event at the Canadian Olympic Swimming Trials. 11:30

The missing time in between events is equivalent to a full swimming season, MacDonald says.

“Summer is only going to have four weeks, which is pretty tough to go into a big block of hard training and come back out with a big, huge drop [in time],” he said.

Then again, the circumstances of the past 18 months may be the only reason McIntosh is able to compete in Tokyo at all, as MacDonald says it’s unlikely she would have made the team at 13.

“Timing is everything,” he said.

McIntosh moved to the Pan Am pool in Toronto to train alongside Oleksiak in March 2020 after the death of her coach Kevin Thorburn.

Like Oleksiak, McIntosh comes from a family of athletes. Her mother, Jill Horstead, swam for Canada in the 1984 Olympic Games. Her older sister, Brooke McIntosh, is an up-and-coming pairs figure skater.

McIntosh’s smaller frame compared to Oleksiak, whose brother is a towering NHL defenceman, gives her different strengths and weaknesses in the pool.

“Because Summer’s smaller, she can’t generate the power for the 100. And that’s going to take a few years before she can generate that kind of power against girls that are now fully mature women,” MacDonald said.

“She’s in the longer races where it’s more aerobic, therefore, you don’t necessarily need as much power. And being slight is an advantage, to be honest.”

Penny Oleksiak dominated the Rio Olympics in 2016 as a teenager, but dealing with the pressure that followed took its toll. She talks to Adrienne Arsenault about handling the stress and preparing for an Olympic comeback. 8:06

McIntosh will also swim the 800 and 1,500 freestyle at trials. MacDonald theorized that she might eventually hone in on the 200 and 400, while perhaps picking up the butterfly, which was her mother’s event.

For now, she continues to push Oleksiak in freestyle.

“I love Summer. I hate training with Summer,” Oleksiak said after Sunday’s race. “She does not die. She’s 14 so she doesn’t get a lot of lactic acid so every time I train with her, I know she has the gas on and it’s all gas, no brakes with her.”

Iron sharpens iron, and that certainly seems to be happening with McIntosh and Oleksiak.

McIntosh posted a time of one minute 56.19 seconds ahead of Oleksiak’s 1:57.24 on Sunday. Oleksiak topped McIntosh in a preliminary heat earlier in the day.

“She’s just been so awesome and motivating and it’s such an incredible opportunity that I get to swim with her every day,” McIntosh said of Oleksiak on Sunday.

“It was a really fun race. I knew if I was within striking distance in the first 100 [metres], I could be good on the last 50 and that was my plan going in and it seemed to work out.”

The win was a result of hours and days training together and learning from one another.

“It’s what happens when you surround yourself with better people. You become better. And I think that’s exactly what happened. All of a sudden, it’s like, ‘Should [she] be thinking about the Olympics?,” MacDonald said.

It’s not only the Tokyo Olympics she should be thinking about, either. McIntosh will be 17 at the 2024 Paris Olympics, and 21 at the 2028 Los Angeles Games.

By each of those, the podium should be a realistic goal.

“This trajectory indicates that she’ll be a medal threat in Paris, for sure,” MacDonald said.