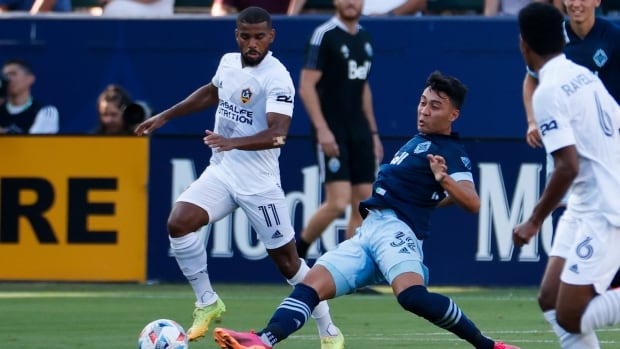 The Vancouver Whitecaps settled for yet another draw on Sunday, battling the L.A. Galaxy to a 1-1 tie.

The ‘Caps (3-7-7) are undefeated in their last five outings but remain stuck at the bottom of the Western Conference after taking single points from their last four games.

Head coach Marc Dos Santos thought his side could have left with a different result on Sunday.

“Not only did we get the draw, but I felt that in moments of the second half, we were very close to getting the win,” he said.

L.A. opened the scoring in the 32nd minute when Kevin Cabral blasted a right-footed shot in from near the penalty spot.

Poor defending by Vancouver had left the 21-year-old Frenchman wide open in the penalty area and when Vancouver ‘keeper Maxime Crepeau came off his line to defend, Cabral was quick to capitalize.

Lucas Cavallini nearly netted an equalizer before the half but his bicycle kick sent the ball just wide of the net.

The burly striker returned to Vancouver’s lineup after an extended absence with Canada’s national squad at the Gold Cup. He played 45 minutes before suffering a knee injury and was replaced by Russell Teibert to start the second half.

Vancouver was quick to even the score out of halftime.

Deiber Caicedo sent a cross into the box off a corner kick and Ranko Veselinovic sent a header careening in past Galaxy ‘keeper Jonathan Bond for his first MLS goal.

“It was a perfect cross from Deiber and I just managed to flick the ball into the net before Bond,” said the 22-year-old Serbian centre back. “I’m happy about it. My first goal in MLS. I hope there’s going to be more.”

The ‘Caps continued to press but couldn’t find the back of the net.

Newcomer Ryan Gauld had the best chance of the night after coming off the bench in the 77th minute. The Scottish attacking midfielder fired a rocket from the top of the penalty area, forcing Bond to make a heroic superman save.

Bond had four saves on the night and Crepeau made five stops. The Galaxy (10-6-2) outshot the Whitecaps 16-10.

“I already knew there was a lot of quality throughout all the teams in the league but I think we held our own, especially in the second half,” he said after his first outing.

Gauld has had a single week of training with his new teammates but said the transition has been easy.

“Being surrounded by good players, it makes it easier to gel, to fit into the team,” he said. “And it’s a good bunch of boys as well. Whenever you’ve got quality around you, it always makes the transition easier.”

Still, before Sunday, he hadn’t played a competitive soccer game since May 19.

“I might have looked fresher than I felt,” Gauld said with a smile.

The Whitecaps will be back in action on Friday when they face the Earthquakes in San Jose.

Montreal (6-7-5) is winless, with three losses, in its last four games.

D.C. United has won four straight at home after winning just three of its previous 13 matches at Audi Field (D3 L7). It is D.C.’s longest home win streak since running off five straight home wins to end the 2018 regular season.

Zachary Brault-Guillard ran onto a long through ball by Joel Waterman before chipping a long-range shot over the head of goalkeeper Jon Kempin to give Montreal a 1-0 lead in the 16th minute.

Najar, who spent three seasons with D.C. United (2010-12) before returning to MLS with Los Angeles FC last season, scored in the 40th minute and Kamara’s goal in the 54th capped the scoring.

Kamara, who scored twice in a 4-2 win at Columbus on Wednesday, is the first D.C. United player to score in more than four straight