When Someone Shows You Who They Are, Believe Them By Dina Strada When someone shows you who they are, believe them the first time. Maya Angelou I remember first hearing these words in my early twenties. I heard them. I just didnt follow them. Hence, I brought myself a whole lot of painful lessons and needless suffering because I always wanted to give people a second chance, and a third, and a fourth … You get the picture. I was the girl who always saw the potential in people. The person they could be, with a little love and nurturing from yours truly. I considered myself to be one of the most loving, loyal, and big-hearted people out there. And besides, there were very few things I truly wanted that I went after and didnt get. I suffered many disappointments and even more heartbreaks because of this, both in friendships and romantic relationships. I expected people to change just because I thought they should be or feel a certain way. But at that point in my spiritual journey, I hadnt yet learned that everyone is on their own path, and sometimes their soul just isnt in alignment with yours. When I fell for some guy and had it made up in my mind that he was it, I made a lot of excuses for his behavior, which was never in alignment with what I was looking for. Well-meaning friends would warn me in the beginning: He doesnt sound like a good match for you. His behavior seems a little sketchy. Did I listen? No. My ego was way too big. Sure, I saw the behavior. I even saw the red flags. But I thought I was different. I was so special that I felt I could change that person… just by being wonderful, amazing me. NOTE TO SELF: When people show you who they are, believe them the first time! I married someone after seeing all the red flags in the very beginning. Behavior that didnt add up to what I was being told, behavior in past relationships that was not filled with integrity. But there was so much about him that was good and pure, and the love and passion we had for each other was real and intense. I truly believed that people could change. And they can. But more importantly I believed I was different, and that behavior would never exist again now that he was with me. It should be no surprise that the marriage ended and was the most devastating and painful loss of my life. But that was the moment I started to live by Maya Angelous mantra. The dating world after divorce is a lot of things—exciting, fun, scary, sometimes horrible, but most of all, a test. How much have you learned from your previous relationships? And what are you going to do differently this time around? For me, I learned a lot, but I have blind spots. And comfort zones I fall into. I keep gravitating toward men that feel like home, except that home never made me feel good or secure in it and it was definitely a place I shouldnt consider settling in long term. Some warning signs Ive finally learned to look for and walk away from: Lack of commitment to anything especially in relationships Not a great communicator Not being emotive with feelings History of cheating in past relationships Always looking for the next best thing These are my red flags. Someone elses may be completely different. But they are things I know just wont work for me and will eventually lead to heartbreak. What I tell friends when I see them falling into the same trap I often do is to ask themselves some key questions and to be rigorously honest: Is this person someone who embodies all the things that are important to you, or are you convincing yourself that you can change them? You can never change someone. Walk away. Are you attracting the same type of person you always do (the one who never works out for you and always leads to heartbreak)? If so, walk away. Does this person have all of the things that are on your Essentials List? Those are the things that are your must haves and are non-negotiable. For me, those are trustworthy, spiritual, a great communicator, and someone who is affectionate, loving, and expressive with their emotions. If this person doesnt have your essentials, walk away. The best advice I got just this week was from a friend who knows my journey well. He said, You know what. Just recognize that you are finally learning what your heart truly wants and moving closer to that every day. Youre walking away from people who arent in alignment with your core values anymore. So yes, Im learning. And I still have a ways to go. But I trust that the right one, the one who steals my heart for good, will show me how amazing he is for me…. the first time. Quarreling couple image via Shutterstock See more posts About Dina Strada Dina Strada, an Event Planner, writer, and intuitive counselor and coach, is passionate about expanding consciousness and helping others discover and live their lifes purpose.  Shes a graduate of Boston College and Coach U, a corporate and personal coach training program.  To learn more about Dina, visit her website Essential Balance cvmusicstudio.com | More Posts See a typo or inaccuracy? Please contact us so we can fix it! Did you enjoy this post? Please share the wisdom :) 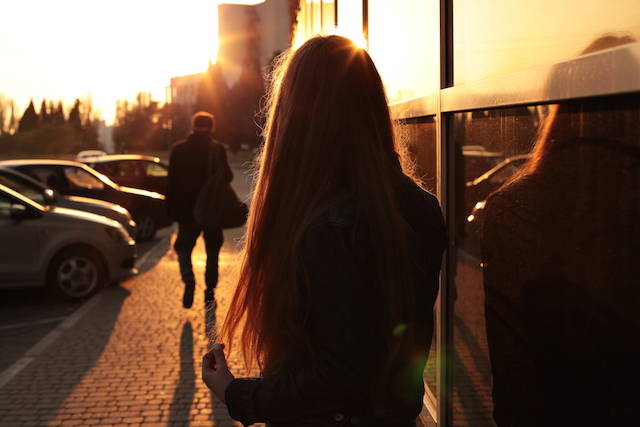 “When any individual displays you who they’re, imagine them the primary time.” ~Maya Angelou

You are watching: When someone shows you who they are believe them

I consider first listening to those phrases in my early twenties. I heard them. I simply didn’t practice them. Therefore, I introduced myself plenty of painful courses and pointless struggling as a result of I all the time sought after to provide folks a 2nd likelihood, and a 3rd, and a fourth … You get the image.

I used to be the lady who all the time noticed the “doable” in folks. The individual they “may” be, with a bit of love and nurturing from yours really. I thought to be myself to be one of the crucial loving, unswerving, and big-hearted folks in the market. And but even so, there have been only a few issues I really sought after that I went after and didn’t get.

I suffered many disappointments and much more heartbreaks as a result of this, each in friendships and romantic relationships.

I anticipated folks to switch simply because I believed they must be or really feel a undeniable approach. However at that time in my religious adventure, I hadn’t but realized that everybody is on their very own trail, and infrequently their soul simply isn’t in alignment with yours.

Readmore: A brief history of vaccination

Once I fell for some man and had it made up in my thoughts that he was once “it,” I made numerous excuses for his conduct, which was once by no means in alignment with what I used to be in search of. Neatly-meaning pals would warn me to start with: “He doesn’t sound like a just right fit for you. His conduct turns out a bit of sketchy.” Did I pay attention?

No. My ego was once approach too massive. Certain, I noticed the conduct. I even noticed the crimson flags. However I believed I used to be “other.” I used to be so particular that I felt I may alternate that individual… simply by being superb, superb me.

NOTE TO SELF: When folks display you who they’re, imagine them the primary time!

I married any individual after seeing all of the crimson flags within the very starting. Conduct that didn’t upload as much as what I used to be being advised, conduct in previous relationships that was once now not stuffed with integrity. However there was once such a lot about him that was once just right and natural, and the affection and fervour we had for every different was once actual and intense.

I really believed that individuals may alternate. And they are able to. However extra importantly I thought I used to be other, and that conduct would by no means exist once more now that he was once with me.

It must be no marvel that the wedding ended and was once essentially the most devastating and painful lack of my existence. However that was once the instant I began to are living by means of Maya Angelou’s mantra.

The relationship international after divorce is numerous issues—thrilling, amusing, horrifying, infrequently terrible, however maximum of all, a check. How a lot have you ever realized out of your earlier relationships? And what are you going to do in a different way this time round?

For me, I realized so much, however I’ve blind spots. And luxury zones I fall into. I stay gravitating towards males that really feel “like house,” with the exception of that house by no means made me really feel just right or safe in it and it was once certainly a spot I shouldn’t imagine settling in long run.

Some caution indicators I’ve in spite of everything realized to search for and stroll clear of:

Those are my crimson flags. Any individual else’s could also be utterly other. However they’re issues I do know simply received’t paintings for me and can sooner or later result in heartbreak.

What I inform pals once I see them falling into the similar lure I steadily do is to invite themselves some key questions and to be conscientiously truthful:

The most productive recommendation I were given simply this week was once from a chum who is aware of my adventure neatly. He stated, “You already know what. Simply acknowledge that you’re in spite of everything studying what your center really needs and shifting nearer to that on a daily basis. You’re strolling clear of individuals who aren’t in alignment together with your core values anymore.”

So sure, I’m studying. And I nonetheless have a long way to move. However I accept as true with that the proper one, the person who steals my center for just right, will display me how superb he’s for me…. the primary time.

See more: When did The Beatles break up and who left first?

Six of the best podcasts about beer
The Genius 2021 Year In Lyrics (So Far): Top Songs